A graduate of HARVARD LAW SCHOOL (1973), and who has handled cases in both the United States Supreme Court and Michigan Supreme Court, Marshall Lasser is a tough, aggressive Oakland County workers' compensation lawyer who for 40+ years has fought for the injured against insurance companies as well as the lawyers and doctors they use to wrongfully deny insurance and injury claims.

Marshall Lasser provides exceptional legal advice on an individual "one on one" level. Each case is handled personally and never "farmed" out on commission like so many of the Personal Injury Law Factories around today. Marshall's commitment to you means he will aggressively pursue litigation until a fair and equitable settlement in your favor has been reached.

Marshall Lasser has 40+ years experience representing people who have been injured on the job. Here are critical facts:

Michigan law currently states that if you slipped or tripped on a hazard that was "open and obvious", you cannot sue the premises owner except in very rare cases. However, in November 2020 new justices were elected to the state Supreme Court, and there's a good chance this terrible law will change.

If you are injured in a moving vehicle accident, you may have 3 different claims! First, worker's compensation, if the injury was on the job. Second, no fault insurance benefits. Third, a negligence claim against the person or company which caused the accident.

Such as an injury moving freight inside or outside a vehicle, or getting on or off the vehicle, or tying down freight on a vehicle. Again, you may have 3 different claims: First, a worker's compensation claim, if the injury was on the job. Second, a no fault insurance claim, if the worker's compensation insurer denies the comp claim or cuts off benefits, but only if you have made a no fault claim within the first year after the accident. Third, a negligence claim, if the injury was due to the fault of someone other than a co-workers.

A tradesman injured in a construction accident may be entitled to more than worker's compensation. If it can be proven that the accident was due to the negligence of someone other than a co-worker, you may have a negligence claim for pain and suffering and all lost wages and medical bills. 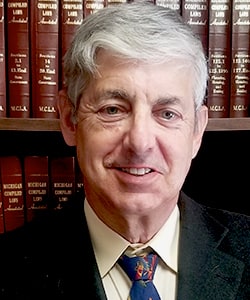 I'm a graduate of Harvard Law School who chose to dedicate his life NOT to representing wealthy corporations and insurance companies, but representing injured workers and their families. I handle injuries on and off the job. Unfortunately the process sometimes takes years - but I don't give up, and have taken many cases to the Michigan Supreme Court and United States Supreme Court.

View More
In The News
Client Reviews
★★★★★
"Marshall Lasser is aggressive, always attacking, knows the law and never gives up. He won my Worker’s comp case and my negligence case against the general contractor." - Lou Ghaffari
★★★★★
"Lasser fights hard and he's smart. He won the work comp case and sued the homeowner whose busted driveway caused my injury. Mr. Lasser got a jury verdict for me in that case, when other lawyers told me the jury would give me nothing." - Barbara Wood
View More
Submit a Law Firm Client Review
Contact Us